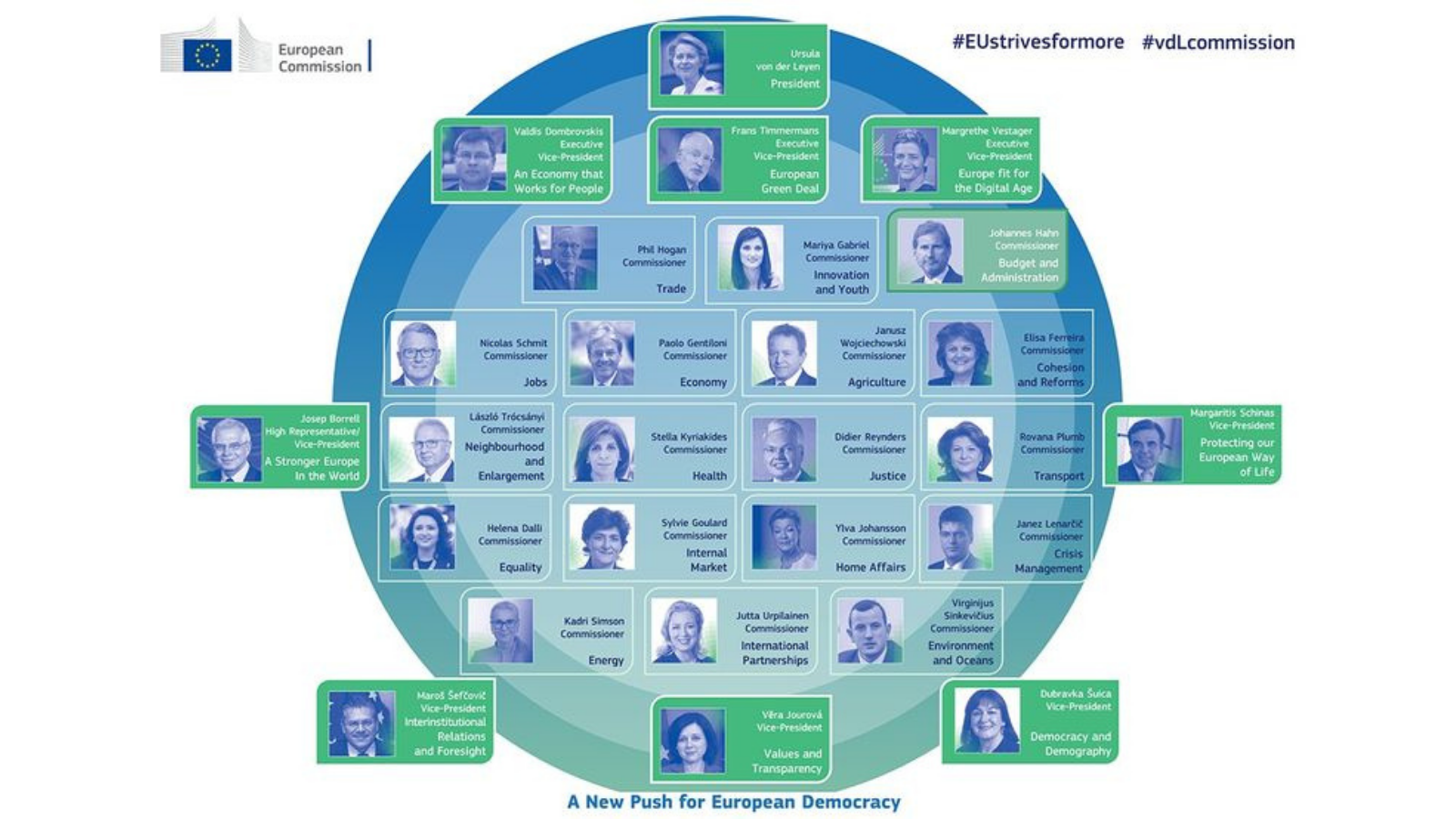 On 10th September 2019, the President-elect Ursula von der Leyen presented the structure of the next European Commission and its new 26 Commissioners. This new structure aims at reflecting the objectives and priorities pointed out by von der Leyen before being elected by the European Parliament, i.e. a major focus on climate change, equality, and future digital and technological challenges (Political Guidelines for the next commission). According to the President-elect, the main objective is to create a well-balanced, agile and modern Commission focused on the issues at hand and ready to provide efficient answers to its citizens. The new Commission will have to understand Europe and listen to what Europeans want. The President-elect has also committed to working closely with the newly elected European Parliament in order to strengthen democracy and obtain a fair social market economy.

The New College of Commissioners

The new College of Commissioner will have eight Vice-presidents charged with steering the work of the Commission on the most important overarching issues. Three of these Vice-presidents shall also hold the position of Executive Vice-Presidents. As such, they will be responsible for one of the three core topics of von der Leyen’s new agenda:

1.Executive Vice-President Francis Timmersman (Netherlands) shall coordinate the work on the European Green Deal strengthening EU policies to fight climate change and promote sustainability. The goal for the EU is to become the world’s first climate neutral continent by 2050;

3.Executive Vice-President Valdis Dombrovskis (Latvia) shall coordinate the work on an Economy that Works for People and be the Commissioner for Financial Services.

The five other Vice-presidents are:

1.Josep Borrell (Spain): High-Representative of the Union for Foreign Policy and Security Policy designate for A Stronger Europe in the World;

5.Dubravka Šuica (Croatia): Democracy and Demography. She shall also coordinate the work on the Conference on the Future of Europe from the Commission side.

In addition to this, the new college will be formed by 18 other Commissioners. They represent the core of new structure of the European Commission and shall be responsible to manage the expertise provided by the various Directorates-generals.

2.Didier Reynders (Belgium): Justice (including the issue of rule of law);

More specific information about the new Commissioners can be found at this page.

What this means for Eurochild:

The most relevant Commissioners for Eurochild’s work are the following:

Vice-president Dubravka Šuica (Croatia - Democracy and Demography) will be responsible for coordinating the work on the future Child Guarantee, ensuring that children have access to the services they need and are supported through to their adult lives. She shall also prepare a comprehensive strategy on the rights of the child that should include actions to protect vulnerable children, protect their rights online, foster child-friendly justice and prevent and fight violence (Mission Letter). She will be crucial for ensuring that children’s voices are heard in EU policy-making.

Nicolas Schmit (Luxembourg - Jobs) will be working to strengthen Europe’s social dimension. He will be responsible for reinforcing the Youth Guarantee and leading the work on developing a European Child Guarantee as a tool to fight poverty and ensure children have access to basic services (Mission letter). As a consequence, he shall work directly with the DG Employment, Social Affairs and Inclusion, the directorate with which Eurochild has a strategic partnership.

Didier Reynders (Belgium - Justice) will enforce children’s rights and ensure that every decision shall not to harm children’s best interest;