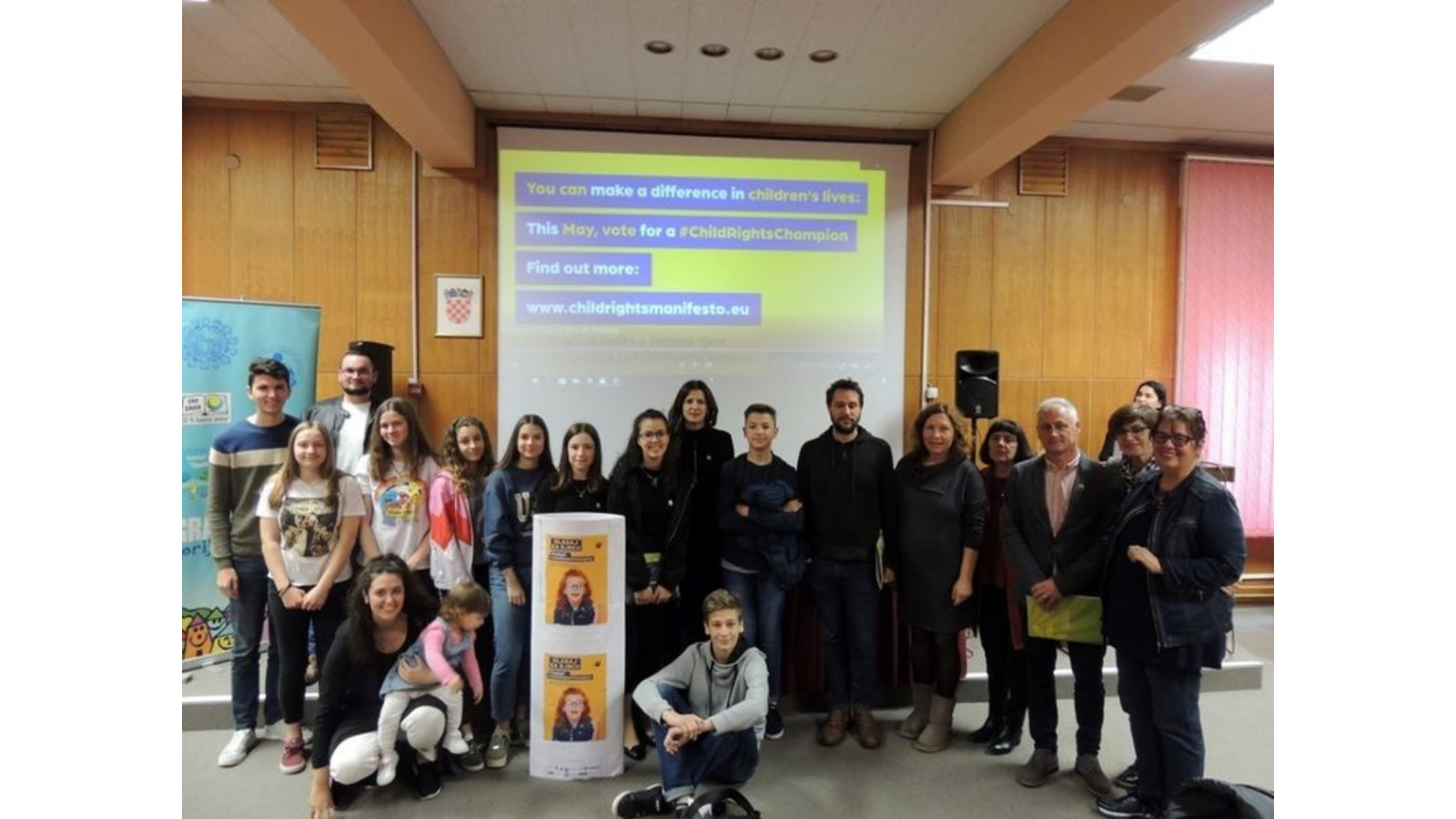 On 14 May 2019 children from Children’s City Council Opatija organised a panel discussion between children and candidates for the European Parliament elections to encourage candidates to become child rights champions. As Child Rights Champions, elected parliamentarians would be expected to invest in children; break the cycle of poverty facing 25 million children and listen to the voices of children.

Eurochild member Society “Our Children” Opatija (SOC) presented the Vote for Children campaign and other international activities of the Children’s City Council. The Vote for Children is seeking commitment from candidates for the European elections to become champions for children’s rights. This event took place at the Villa Antonio, in the framework of the project "Playing we learn about our City", supported by the Ministry of Demography, Family, Youth and Social Policy, under the project activity "Every Voice Matters". The Children's City Council (CCC) Opatija presented the projects they have been included in, on the local, national and EU level.

Among participants, there were elementary school students from Opatija and Lovran who are attending Citizen’s Educational Programs, former members of CCC Opatija and Children’s forum, school and kindergarten principals, Deputy Mayor of the City of Opatija Emil Priskić, Danijela Žagar from the Office of Ombudsman for Children in Rijeka and candidates from the list of candidates for the European Parliament elections in the County Primorsko-goranska: Candidates Romana Jerkovic (SDP), Majda Manjgotić Paravić (Union of Kvarner) and Nebojša Zelić (We Can! - Political Platform) were present at the event.

Sanja Škorić, secretary of the SOC Opatija, reminded participants of the UN Convention on the Rights of the Child adopted in 1989 which this year is celebrating the 30th anniversary of adoption. The Republic of Croatia ratified the Convention in 1991. The Children’s City Councilors Vedrana and Jan presented the work program of their mandate and Lucija presented results of the "Europe Kids Want" survey. Former Child Mayor, Petra and Jan spoke about the international activities of the CCC and Children’s Forum, their involvement in the European Commission Forum on the Rights of the Child, the Eurochild Children’s Council and Petra’s involvement in the Council for Children of the Republic of Croatia. Vedrana and Raffael presented the Bucharest EU Declaration about active participation of children, following their participation in the International Conference on Children’s Participation in Decision Making and Policy Making in the EU (also knowns as Children’s Summit).

Councilors Romina and Hana presented the Vote for children campaign and how to become a Child Rights Champion. The candidates committed to the promotion of children’s rights and to become promoters of children's rights because children are our future leaders and they are our future. Children asked the candidates to the European Parliament about children's rights, their social rights and environmental protection. All candidates present at the event said that, if they would win the mandate, they would invite students from Opatija to the European Parliament. Following a hearty discussion, each of the candidates signed up to become Child Rights Champions!