This report presents the highlights and learning from the three-day programme to provide inspiration and learning on how children can become active agents in influencing and improving public decision-making.

Eurochild’s 13th Conference took place on the 29-31 October 2018 in Opatija, Croatia on the theme of children’s participation in public decision-making. The event was organised under the patronage of the President of the Republic of Croatia. Eurochild’s member Society ‘Our Children’ Opatija a non-governmental organisation which promotes the realisation of children’s rights in society hosted the conference. They partnered with the City of Opatija which has committed to take care of its youngest citizens and develop the city based on the needs and views of its children. The City of Opatija received an honorary title Child Friendly City in 2005 and proved a welcoming location for children and adults alike.

The conference brought together practitioners, researchers, civil society actors, policy and decision makers along with children and young people themselves to contribute to improving children’s participation in public decision-making. The conference showcased positive examples of how public decision-makers at local, national and European levels respect the right of children to participate in decisions affecting them, and recommendations for further action.

Nearly a third of the 326 delegates were children under the age of 18 – an impressive proportion for such an important conference. 100 children and young people under the age of 18 brought their ideas and perspectives on how to better engage in public decision-making. Such a rich and valuable set of experiences from across Europe ensured an inspiring, worthwhile, exciting and purposeful event in the child-friendly city of Opatija.

Autumn 2019 Survey Children and young people have a key stake in Europe’s future. Not only because it is their future that is affected by today’s decisions, but also because…
read more 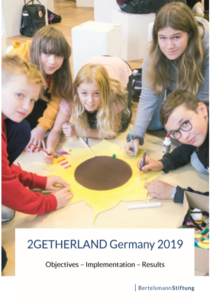 2GetherLand 2019 shows how to tackle social injustice with young people

The 2GETHERLAND 2019 Germany Results Report has been published Seeking to investigate the assumption that young people affected by social injustice have their very own view of the problem, the 2GETHERLAND…
read more

Redefining Power: Strengthening the Rights of the Child

This report, made by children and for children, showcases the highlights of the conference on the 30th Anniversary of the UN Convention on the Rights of the Child T o…
read more
Cookie Policy
This website uses cookies to ensure you get the best experience on our website. Learn More
Decline Allow Cookies